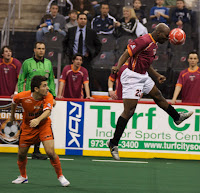 NEWARK, N.J. (Saturday, March 29, 2008)- The New Jersey Ironmen (14-15) won a heart pounder tonight over La Raza de Monterrey (15-13) at Prudential Center in a critical late season match up. Dizzy Antoniuk drilled the game-winner with 83 seconds left to secure the thrilling 14-12 decision. The win gives New Jersey a 1 1/2 game lead over the Philadelphia KiXX (12-16) for the final spot in the 2008 MISL playoffs. Philadelphia suffered a tight 15-13 overtime loss to the first-place Milwaukee Wave (20-7) tonight at the Wachovia Spectrum.

The Ironmen retained the theme from a defensive battle in Detroit last night with both clubs going scoreless in the first quarter. After the opening frame, the scoreboard remained empty.

Monterrey midfielder Victor Negrete put up the first points of the match at 3:56 of the second quarter when he finished an assist from reigning MISL Defender of the Year Genoni Martinez, giving La Raza a 2-0 lead. Midfielder Goran Vasic answered for New Jersey when he sent home an unassisted two-point tally at 6:11 to even the count at two each. Monterrey midfielder Victor Quiroz then set up Dino Delevski for the go-ahead two-pointer at 9:15, and the visitors held on to take a 4-2 advantage to the locker rooms at halftime.

At 1:40 of the third period, the Ironmen evened the count when target Shaun David scored a Freddy Moojen feed, but Quiroz netted a Delevski pass at 4:52 to regain the advantage, 6-4. The two clubs got knotted back up at 7:05 when Antoniuk buried a restart ball from Vasic, and Moojen gave New Jersey their first lead of the game at 8:38 by finishing an assist from defender John Krause. Ironmen defender Ibrahim Kante then bent a left-footed bomb into the upper left corner of the goal at 9:39 to extend the advantage to 10-6. Vasic registered the assist.

David hit his second goal of the evening at 7:28 of the fourth stanza to stretch the New Jersey lead to 12-6. Monterrey replied with three unanswered two-point scores, and the two teams were tied up, 12-12, heading into the final two minutes of regulation. Vasic then hooked up Antoniuk for his third helper of the game at the 13:37 mark, and the Ironmen held on for the victory. Goalkeeper Tony Meola made an incredibly athletic save in the closing seconds to preserve the win.

The Ironmen remain in Newark to close out the regular season, hosting the Baltimore Blast (18-10) this Friday at Prudential Center. Kickoff is slated for 8:00 p.m. If New Jersey is able to defeat Baltimore, they solidify their spot in the postseason. The KiXX play Thursday in Monterrey, and they must win to keep themselves in playoff contention. A Philadelphia loss would automatically send the Ironmen into the postseason.

Posted by DAdamsJr at 11:01 PM No comments: Links to this post 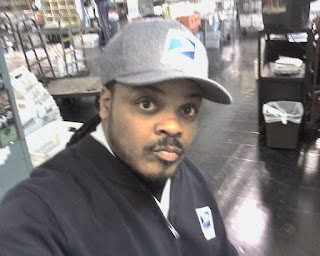 It's 10:30 and i'm about to hit the street.
It's kinda windy outside today,but the sun is shining bright.
Not a HEAVY mail day.
I will be shooting the Ironmen Soccer game tonight at 'The Rock'.
I still have to put up some pics from last weeks game.
STAY TUNED ALL DAY...EVERY DAY!!!

Posted by DAdamsJr at 10:27 AM No comments: Links to this post