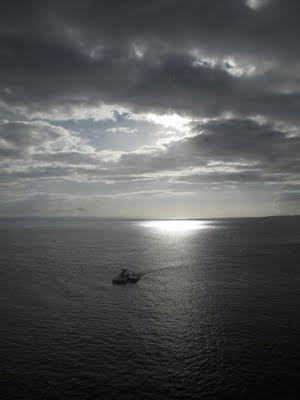 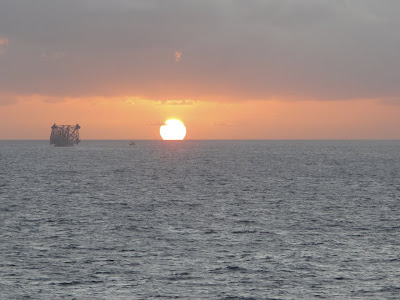 Today started at 6am for me.
I wanted to watch the sunrise, at the top of the ship.
While there, I met a very nice woman (my moms age) originally from Jersey, but now lives in Florida.
We had a very lenghthy conversation.

By the time I got back to the Stateroom, it was 8:30 am
I planned to do a mile around the jogging track, but that didn't happen.
Wanda and I were pretty excited about going ashore in Samana, Dominican Republic.
We ate breakfast, and then stood in line to get our numbers to get on the smaller boats to take us to the island.

Samana does not have a DEVELOPED PORT yet, so we had to get off the ship, onto a smaller boat (the boats that hang on the ship, and are used for emergencies)
We didn't purchase any on shore tours from the ship, so when we got to the island (20 minutes by boat from the ship) , I saw a Dominican guy with a photo album soliciting people to go on tours.
We walked up to him and looked in the album, and decided we wanted to go to the waterfalls.
Talking to him in Spanish, I asked him "how much?"
He said $60 for the both of us there and back.
That was not a bad deal, although later on i thought to myself " I could have talked down the price"
So I told him I needed some cash.
He called over a guy on a motorcycle with a 4 seat contraption attached to the rear.
He said the guy would take us to the ATM, which was about an 8 minute ride, and bring us back for the tour ( this was all included in the $60)
My Newark Street Smarts started kicking in....LOL.
As we got on the seat, I just noticed ALOT of people bustling around this area trying to make all sorts of deals....and they ALL looked like ME (same color....Newark Street Smart Moment #2...LOL)

While riding to the bank, there were people on the sides of the roads selling fruits, and then I noticed a motorcycle speeding up to our left with 2 guys on it.
One of the guys looked over with a sneaky grin and then they slowed down to get behind us (Newark Street smart Moment #3)

We got to the bank and I started pulling out my ATM card to put in the machine.
There was a guy standing therewho told me in Spanish that the ATM would not give me American money, so I would have to go inside the bank.
I said "gracias mi hermano" (thank you brother), and proceeded inside the bank.
The bank was PACKED, and the security guard gave me a number to see a clerk.
Thats when EVERYTHING came to me at the same time.(Newark Street Smart Moment #4)
I looked at Wanda and said...."I'm not feelin this".
She said OKAY ( stand by your man)
We walked out and I asked the driver how much it would be to take us back without the tour?
He said "vente pesos' ($20)
I said "ni lo intentas" (don't even try it)
(Newark Street Smart Moment #5)
We agreed on $10, even though i thought that was STILL too much for an 8 minute ride, but I paid him...LOL.
We showed our ID's and went back to the ship.

We ate, and then i enjoyed reading my book on New Orleans and listening to the ipod on the top deck of the ship.
Wanda did the same in the sunny section of the top deck (too much sun for me)
After a few hours, we ate again and got ready for the nights events.
I entered a contest in one of the lounges where the contestants had to name a song that the band was playing, and then sing the words to that song.
We had a BALL, as Wanda coached me from the side.
I won second place, but everyone there said i was really the winner.
I sang ALL the words to New York, New York by Frank Sinatra, and TURNED IT OUT!!!
We also checked out a jugglers show in the big theatre....ate again, and i did Karaoke (everyone wanted to do duets with me...even the guys...CRAZY!!!)

We capped off the night with some Buffalo Wings at about 12:30 in the morning.
Stay tuned for tomorrows UPDATES and...BE BLESSED!!!!

Day 3 PHOTOS HERE
Posted by DAdamsJr at 10:47 AM No comments: Links to this post